In Chinese, Xinjiang means “new territory.” Chinese officials have been stationed there for millennia, and the region was ruled by the Qing dynasty since the 18th century, before becoming a province of the People’s Republic of China in 1949, but it has always held a different identity on the fringe of China, populated by Uighurs and other ethnic minorities. There’s even a special word, túntián (屯田), for the Han Chinese strategy of making Xinjiang “Chinese” by encouraging Chinese people to live there. It takes a unique person to find desert landscapes beautiful, and not to be overwhelmed by their loneliness.

Maybe it is because the desert is so empty that it allows us room to project our emotions onto it. The empty space is both an invitation and a challenge. In this photography essay, Patrick Wack seeks to capture the wistful, lonely beauty of Xinjiang, the frontier of China. More than cities, jungles or beaches, the desert seems to pose existential questions: infinite, timeless, a vacuum. The fashion shoots that Pat supported himself with in Shanghai, where he was based, suddenly seemed trivial; the desert, a homeland for nomads, became a spiritual homeland for him as well, an antidote to the superficial banality of Shanghai life.

Chinese investment in the region has resulted in the construction of fantasy palaces, but the scale of the landscape makes such buildings look ridiculous. Orientalist poems like Shelley’s Ozymandias jump to mind: the vanity of human ambitions to shape the world mocked. Cranes and trucks try, and manifestly fail, to domesticate the desert. When I look at these images, I feel that I am seeing not just an empty space, but a visual metaphor for the emptiness and transience of human life itself. It is hard to leave a trace in the desert, but Pat’s photographs record human experiences from China’s edge, preserving a moment in time forever. – Jacob Dreyer, from Out West

Click to expand images (and expand browser window if you can’t see all 15 thumbnails):

Travellers getting on and off the train to Hotan at the Kashgar railway station. This is the only railway linking the oasis towns south of the Taklamakan desert where most of Xinjiang’s Uighur community in Xinjiang lives. 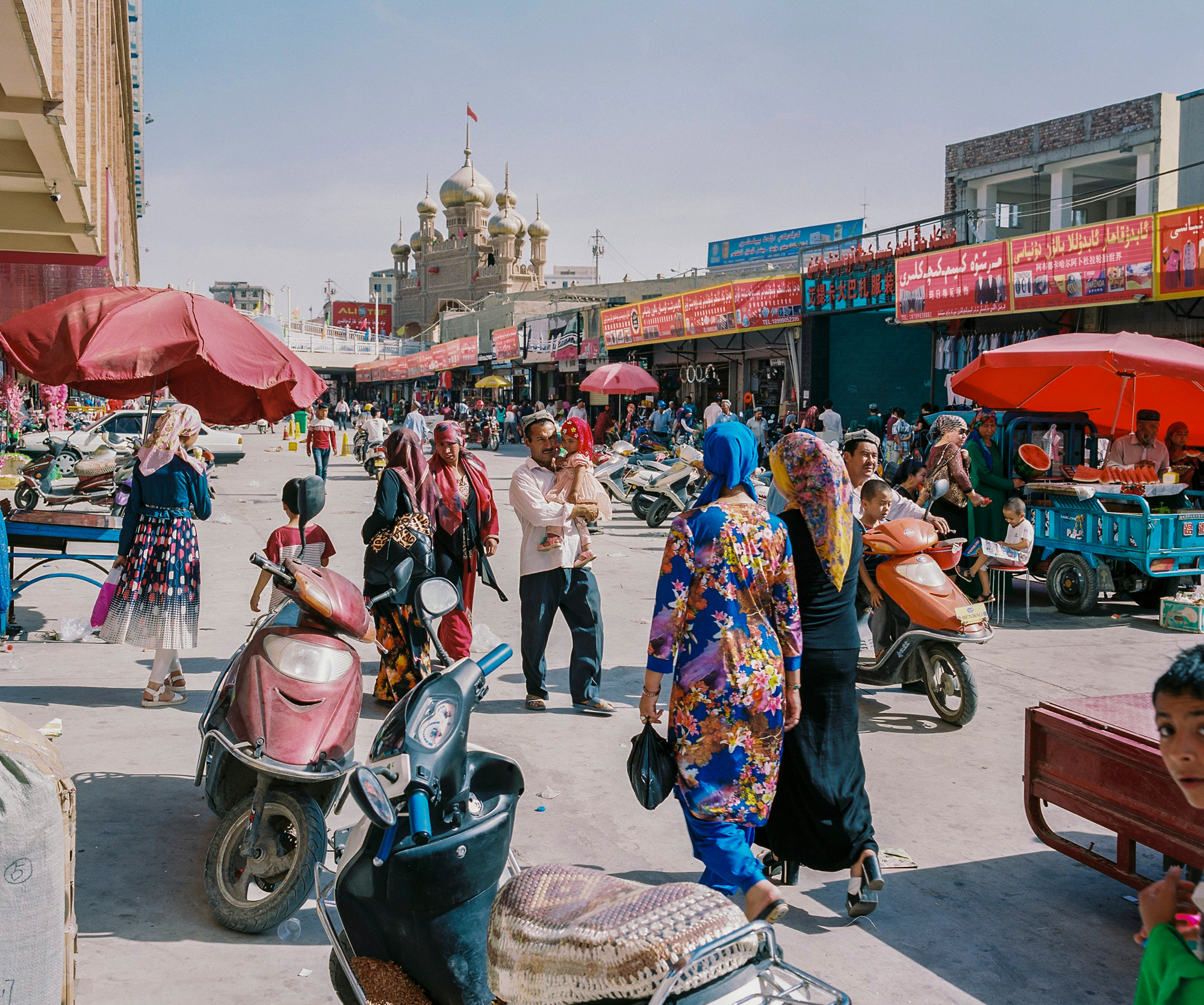 The bazaar of Hotan.

Kazakh minority herdsman on his horse tending to his herd of goats in the Northwestern part of the Chinese province of Xinjiang near the border with Kazakhstan.

A Han Chinese migrant worker fishing in a small lake in the outskirts of Turpan. In the background, a typical item of China’s fast developping West, a half-built half-decaying palace or government building.

Old Han Chinese man photographed in the bedroom of his house. He is the guardian of a mine in the Taklmakan desert in the western Chinese province of Xinjiang.

Oil exploration team from CNPC – China National Petroleum Corporation – operating in the Taklamakan desert in the province of Xinjiang. This team and a few others are setting up thousands of explosive charges for weeks at a time that are all detonated at sthe same time to detect oil fields.

Uighur man looking through the door of his house into the Turpan depression and Ayding lake. Ayding lake is a dried up lake in the Turpan Depression, Xinjiang Uyghur Autonomous Region.

A Han Chinese couple living and working in Tashkurgan posing on the Wetlands in Tashkurgan Tajik Autonomous County in Xinjiang at the border with Tajikistan. He is from Kashgar but they have met in Tashkurgan and now live there. he owns a business.

Pharmacy clerk posing in a pharmacy in Kashgar. 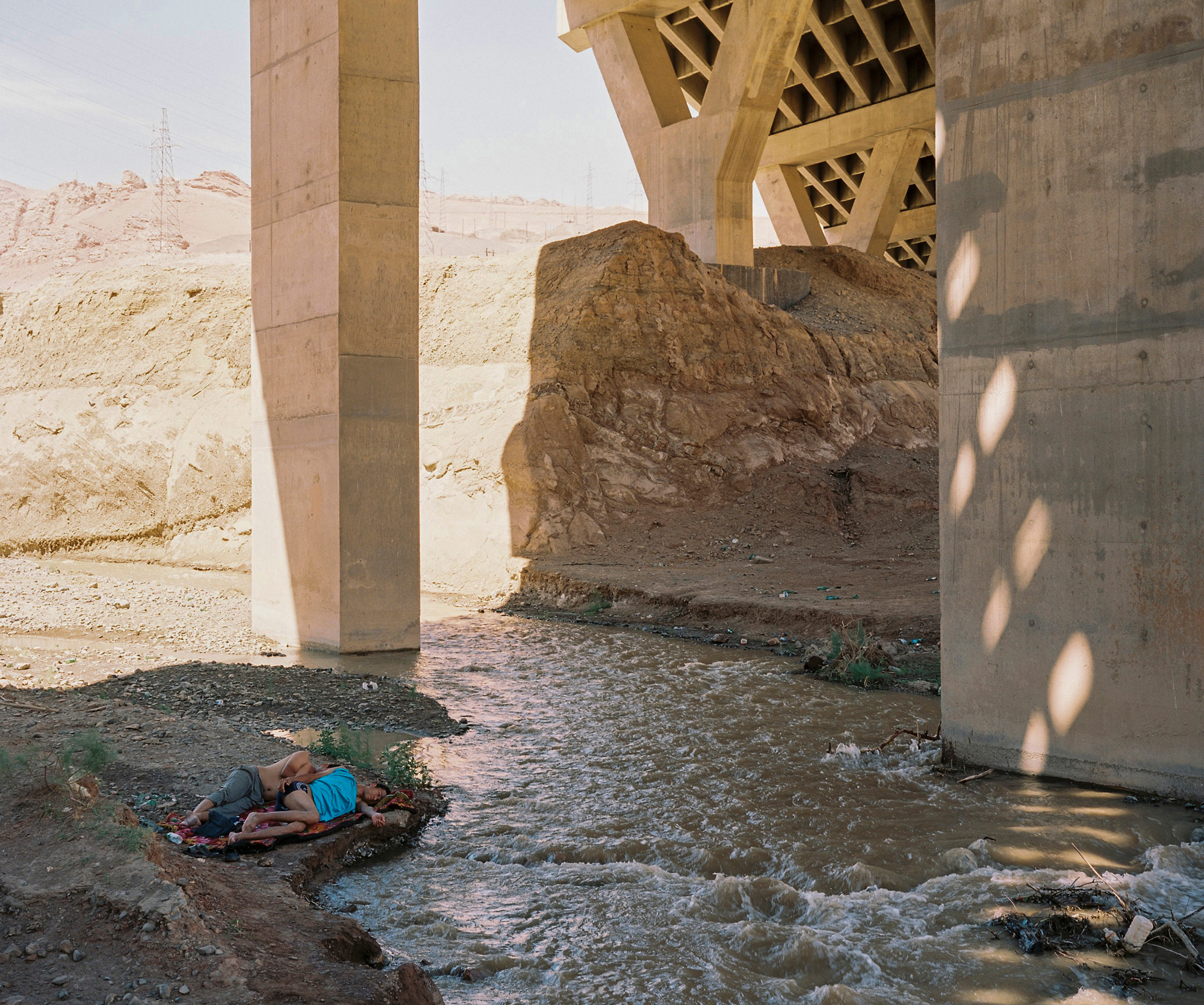 On the road back from Turpan, a mostly Uighur oasis town, to Urumqi, Xinjiang’s capital, we stop for a rest and see these two young Uighur men taking a nap under a bridge while the summer heat is reaching its peak around mid-day.

Kazakh minority Chinese rider on a road in Northern Xinjiang province at the border with Khazakhstan.

Young Uighur-minority seasonal worker in the last days of the cotton harvest in Luntai county in Xinjiang in between Korla and Kuqa, north of the Taklamakan desert. Cotton is one of the largest agricultural industries in the province and many local Uighurs are used as cheap seasonal labour during the harvest.

Uighur-minority seasonal workers in the last days of the cotton harvest.

Tajik father and children on the departure on the Karakoram highway that connects the Western Chinese province of Xinjiang with Pakistan and for quite a stretch runs along the Tajik border.

This post and Jacob Dreyer’s introduction is adapted from Patrick Wack’s photography series Out West. All images are by Patrick Wack, taken in Xinjiang in 2016 and 2017, and are published with permission.

Patrick Wack worked from 2006 to 2017 in China as a freelance photographer in the fields of portraiture, reportage and commercial photography. He has published in The New York Times, The Sunday Times and Travel and Leisure among others. He is now based in Berlin. View all posts by Patrick Wack

They Shut Down the City
Xiaoyu Lu

Image of the week

Our header image rotates on a weekly basis. To explore past images, visit our ‘Image of the Week’ archive.

The China Channel is an affiliated channel of the Los Angeles Review of Books. It is funded by the Henry Luce Foundation, the Cheng Shewo Foundation, the Langfitt Family Foundation and Stephen O. Lesser, with further support from the UCI Long US-China Institute and our readers on Patreon.

"An abundant array of conversation, reporting, essays and storytelling about China that is as surprising and thought-provoking as the country itself."
– James Fallows, writer for The Atlantic

"Those looking for crisply written and authoritative analyses of Chinese politics and culture will be generously rewarded at the China Channel."
– Pankaj Mishra, author of Age of Anger

We are not currently welcoming new article submissions, and the site and its associated email address is now closed. Please refer to our submission guidelines for more information. We pay for all accepted articles.
Loading Comments...